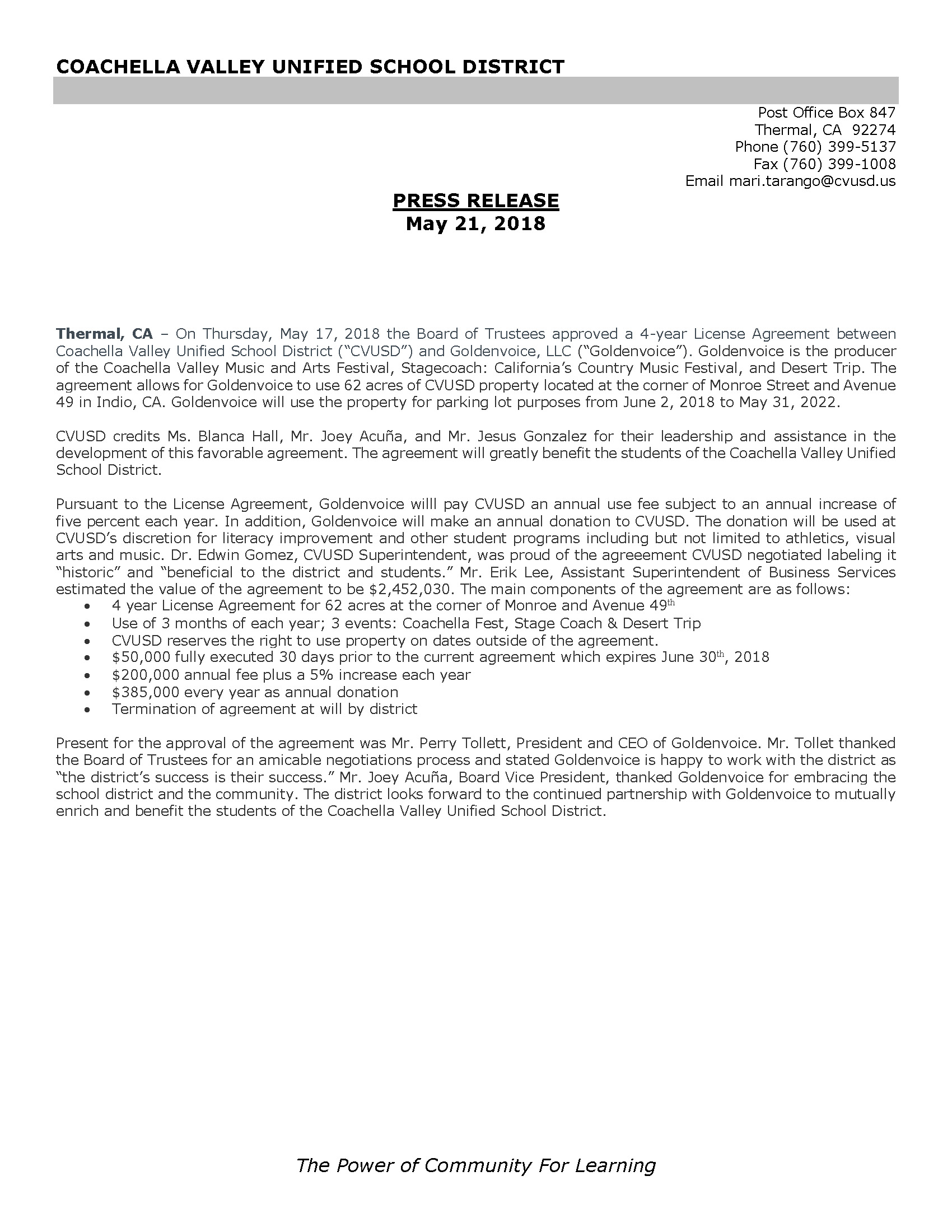 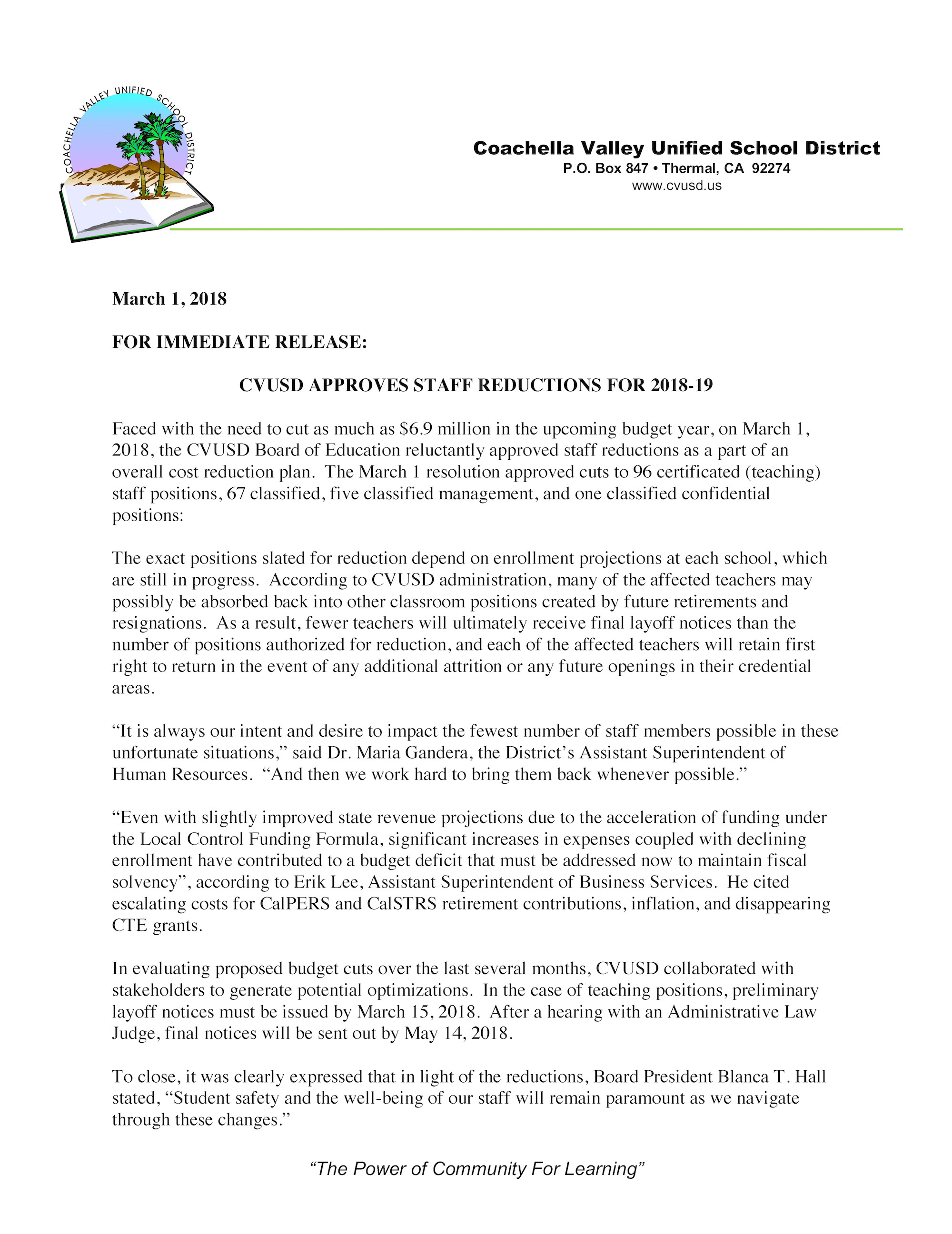 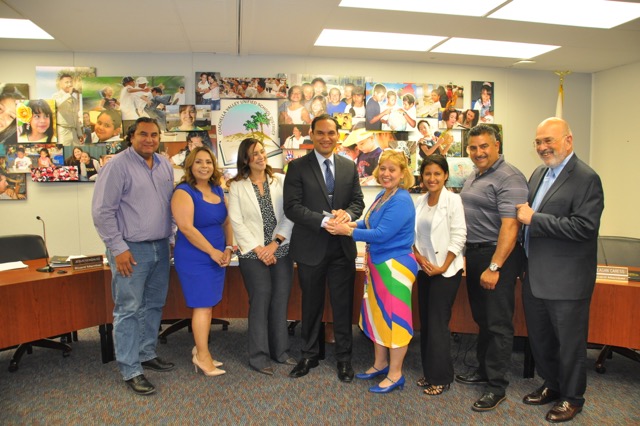 Thermal – The Coachella Valley Unified School District Board of Education is pleased to announce that Dr. Edwin Gomez has been selected as Superintendent of Schools. Dr. Gomez was appointed unanimously at the Board’s May 18th meeting and his starting date will be June 12th.

After an extensive search led by Leadership & Associates, a leading search firm, which included input sessions with administrators, staff, parents and community. An Open Forum for parents and district stakeholders, and an online survey was also conducted. The Board of Trustees conducted thorough interviews and Dr. Gomez was chosen from an impressive list of candidates.

As part of the selection process, two board members traveled to the Adelanto Elementary School District to do a site visitation with Dr. Gomez and his staff, board members, teachers and parents. The trustees were very pleased to know that Dr. Gomez is a highly regarded educator who builds authentic relationships with stakeholders to meet the needs of all students. Dr. Gomez is an exceptional candidate who is a perfect fit for our Coachella Valley Unified School District. Dr. Gomez has received accolades from teachers, staff and parents in his home district and shares the CVUSD’s commitment to excellence. Dr. Gomez has a track record of working tirelessly to meet the needs of students in the areas of equity and diversity. Board President Blanca Hall stated, “Dr. Gomez comes to us with great experiences, understanding and motivation. He has embraced our community and is committed to working for the good of all children. Dr. Gomez will be a great asset to our district.”

Dr. Gomez earned his Doctorate and M.A. from Cal State San Bernardino and his B.A. from Pitzer College. Dr. Gomez is currently the Superintendent in the Adelanto Elementary School District and previously served as the Chief Academic Officer. Dr. Gomez was awarded the ACSA Region 12 Administrator of the Year Award in 2014. Dr. Gomez has taught in grades K-8, and served as a principal in a high poverty community. As a school principal, Dr. Gomez led a school out of program improvement that was subsequently nominated for a National Blue Ribbon Award. Dr. Gomez has a strong belief that building relationships founded on trust and transparency is the key to developing healthy organizations. Dr. Gomez is emphatic that a quality education gives students the opportunity to be successful in college, their career pathway, and in life.

Dr. Gomez’s successful career as a teacher and principal, together with his district level leadership uniquely qualifies him for the position of Superintendent of the Coachella Valley Unified School District. Thermal, CA. – The Riverside County Office of Education honored a record number of high school students this week for their proficiency in more than one language, including two seniors from Desert Mirage High School in Thermal.

“It was really nice to feel that we were representing the whole Coachella Valley,” Orozco Lemus said. “It was an opportunity that presented itself to me and I felt like I had to take it. I finished it and it was a good feeling to see hard work pay off,” he added.

Both Nuñez and Orozco Lemus had to go through a rigorous process to be selected for the Seal of Multiliteracy, including filling out an application, writing six essays (in English and his/her additional identified world language), and interview.

The Riverside County Seal of Multiliteracy is an award given by the Riverside County Office of Education in partnership with districts in recognition of high levels of attained proficiency in English and at least one other world language by high school graduation.

The Seal of Multiliteracy is intended to emphasize the value of knowing multiple languages, contribute to global understanding, encourage the learning of all languages, and connect with community efforts to teach languages and culture in schools and communities.

Nuñez, who attended the ceremony with her parents on Wednesday, truly felt proud to have her mother and father look on as she walked on stage to receive the award. She is looking forward to graduating high school in June and attending California Baptist University in the fall, where she wants to study nursing. Nuñez acknowledges that knowing two languages will help her in her career.

“Our world really needs bilingual people,” she said. “It’s important to be able to communicate with those who need help. It’s truly an advantage to be able to speak both languages [English and Spanish].

Orozco Lemus wants to get an agricultural science degree, a career in which knowing both languages is a highly sought after skill. He also plans on coming back to the valley when he graduates from college.

“You have an opportunity to connect with more people when you know two languages, that’s important to me,” Orozco Lemus said. “I truly encourage other students to apply for programs like the Seal of Multiliteracy and really take advantage of being bilingual, not only in your education, but in a future job.” 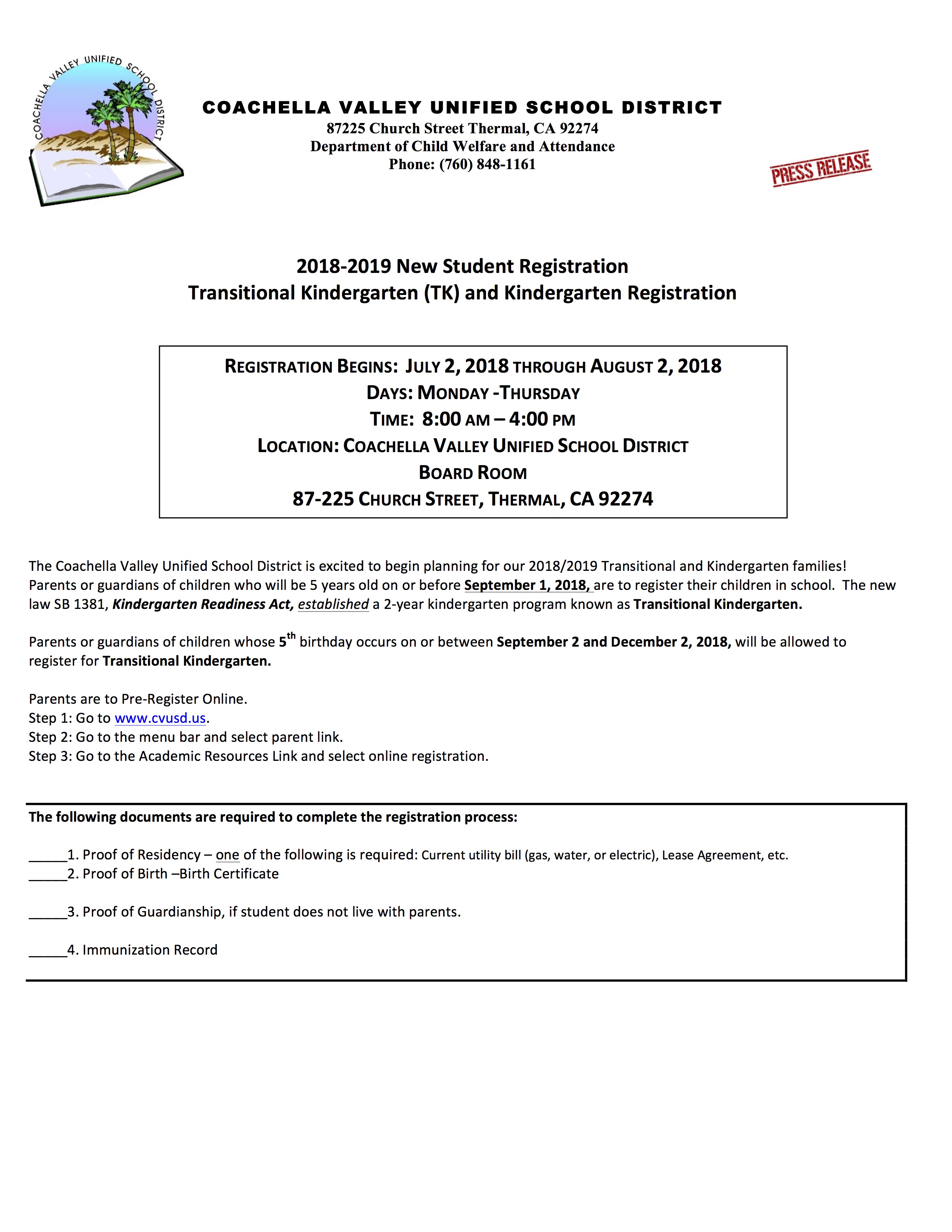 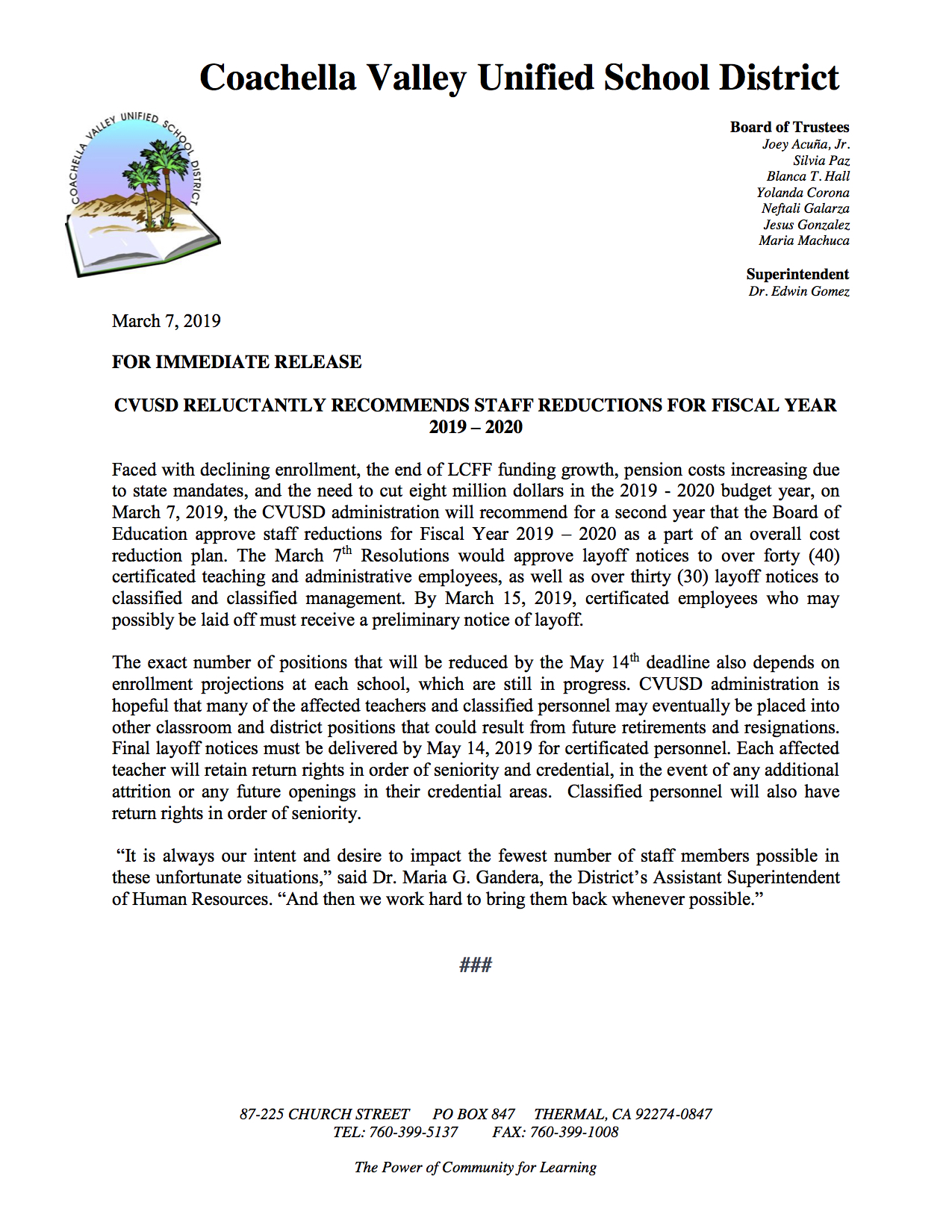 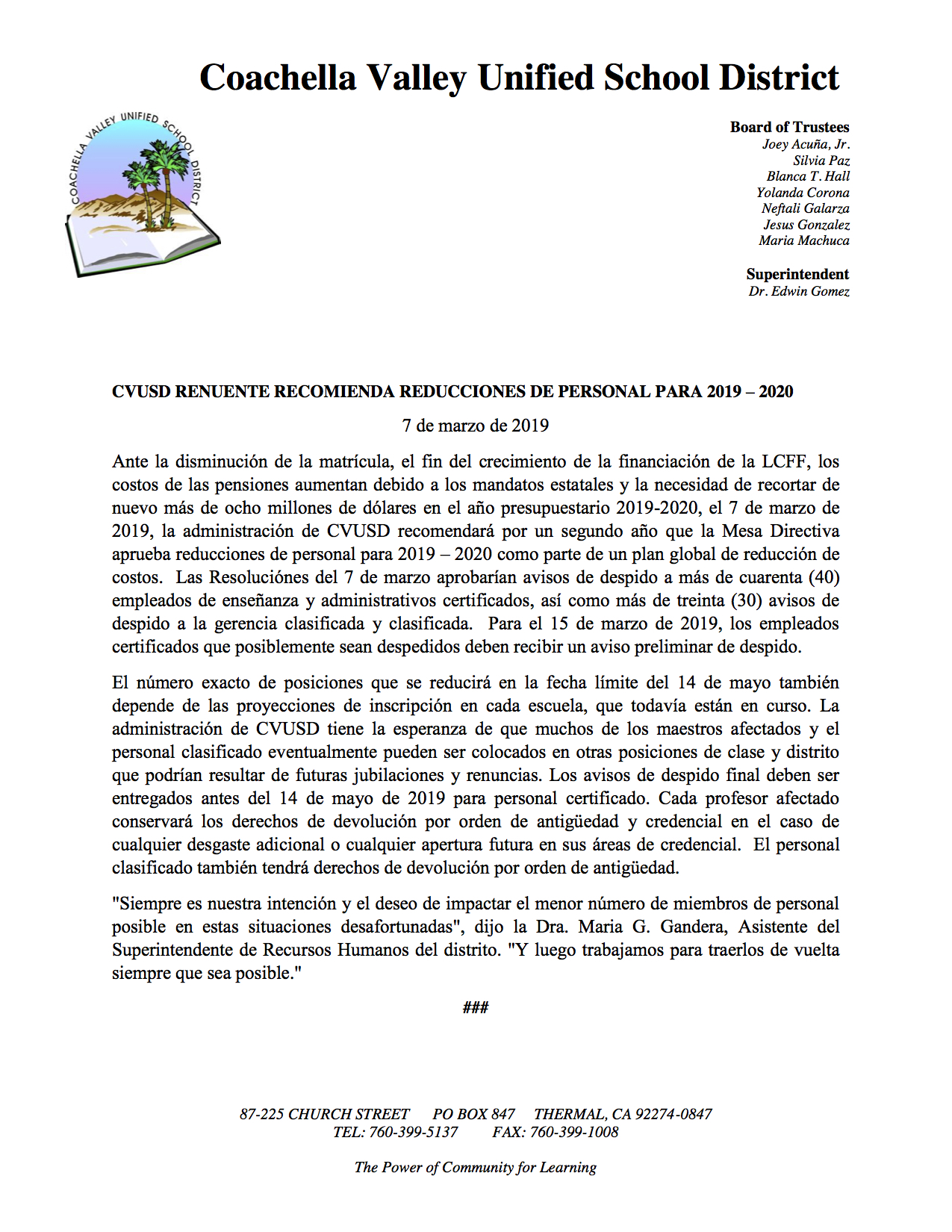